A day tour in the town of Taal, Batangas, always feel like traveling back in time. Gazing up the vintage houses, I realize these are ancestral homes of families whose roots date back to the Spanish colonization era.

Batangas is one of the eight provinces condemned and oppressed by the Spanish government. The other provinces were Manila, Nueva Ecija, Tarlac, Laguna, Bulacan, Cavite and Pampanga. Together, these eight provinces would take the lead in fighting for the Philippine independence. As I walk along the streets lined with vintage homes, I cannot help but feel a sense of Filipino patriotism and pride.

Last week I wrote about Galleria Taal, a vintage camera and photograph museum located along Taal’s main road. A few meters away from Galleria Taal is another beautifully preserved heritage house: The Marino-Agoncillo Home.

Dona Marcela Marino-Agoncillo is known as the Mother of the Philippine Flag. She and her husband Felipe Agoncillo, were both born in Taal and studied in Manila. When they returned to Taal, Felipe became known for his legal services to the poor. In 1896, Felipe escaped to Hong Kong after he was accused of being a filibustero, an opponent to the Spanish regime. His family followed suit and lived with him in exile in Hong Kong. To help earn a bit of income, Marcela made sweets and delicacies that they sold in Hong Kong. When General Emilio Aguinaldo was also exiled to Hong Kong, he asked the help of Marcela to make the Philippine flag. Marcela, together with her daughter, Lorenza, and Delfina Herbosa Natividad, carefully sewed the first Philippine flag on silk, and completed it within five days. This flag was shown in Cavite City on 28 May 1898 during the celebration of the revolutionary army’s victory over the Spanish forces. 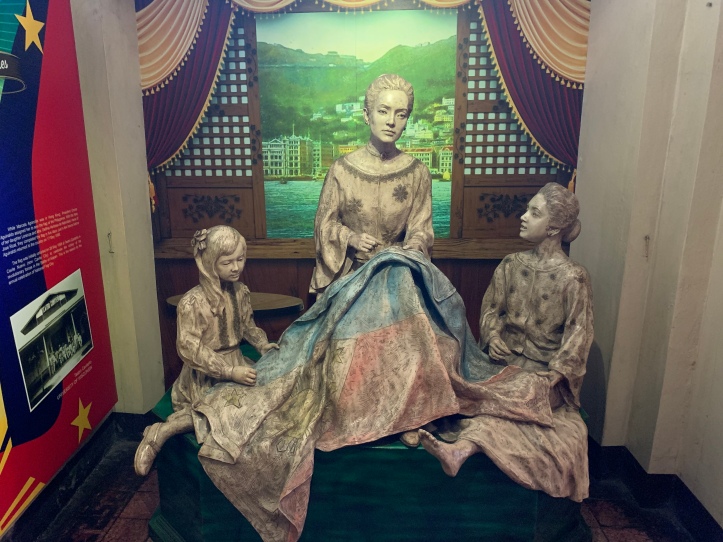 As we entered the house, we ascended its wooden staircase which led to the receiving area, living room and dining hall. The walls and the furniture were mostly made of wood. Rooms were interconnected, and it was amazing to see old trinkets like the sungka (today’s version of a gameboard). There was also an old sewing machine that caught my eye – as I remember we had something similar back home when I was a little girl.

What I like about old houses in the Philippines is the airy feeling from the spacious rooms whose ceilings were also high. They had little to no electricity back then but the houses were well ventilated because the wind could freely blow through the windows, and the trees in their gardens provide shade. A walk in heritage houses also brings me to imagine how it must have felt like living in the olden days. I imagine several decades from now, when the future generations walk through our homes now, they would likewise bring themselves to imagine how simple our lives now must have been.

What comes to your mind when you see or enter vintage houses?