D and I flew all the way to Indonesia with one main destination in mind: the Borobudur Temple in Magelang, in the province of Central Java. Borobudur was built in the mid-9th century during the Syailendra dynasty’s reign. It is 35 meters high and is one of the world’s largest Buddhist temples. It was listed as a UNESCO World Heritage site since 1991, and I remember when I was young, my dad brought home a coffee table book from Indonesia, and I was mesmerized by the photos of Borobudur. I always thought it took a lot of effort to go to, so over the years it did not cross my mind to go until I saw my friend Kyle’s recent Instagram photos. The beautiful pictures he took replicated what I remember from the old book. I asked him how to get there and found that it was not too complicated after all. Though there were no direct flights from Manila to Borobudur, we took the Manila-Jakarta-Yogjakarta route.

Upon arrival to Yogjakarta Airport, we were welcomed by our gracious host, Ika. The drive from Yogjakarta to Ika’s B&B in Borobudur took us about an hour and a half.

When we got to Ika’s place, the Efata Homestay, his wife gave us a map and a list of Indonesian words we could use when ordering food at the restaurants. This proved to be very helpful because it was quite hard to relay my diet requirements whenever we ate out in Indonesia. Our room was simple, clean and comfortable. It had air-conditioning, hot shower, towels, toiletries, and drinking water. Surrounding restaurants at Efata offered very good food at surprisingly affordable prices.

Efata Homestay – really made us feel at home 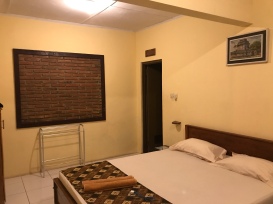 Our room in Efata Homestay 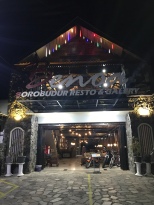 Our favorite restaurant in Borobodur

Probaby the best chicken Dino has had so far

Breakfast at Efata Homestay was delicious (I fell in love with their coffee) and gave us a taste of local cuisine. On our first day we had egg sandwich, mango (harvested from their garden), sticky rice and vegetable roll. The next day we had fresh fruit, Japanese porridge with tofu in coconut milk, egg roll and potato ball. 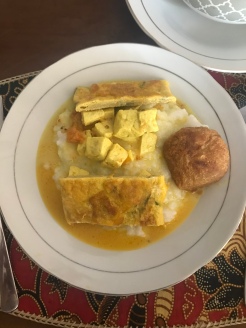 Prior to this trip I’ve seen reviews about both the sunrise and sunset temple tours, and I asked Ika what he would recommend for D and me to take. He said that the sunrise tour was spectacular – though the sun is not guaranteed to always show, it was beautiful nonetheless. The sunset tour was more tranquil, as there were fewer tourists during this time. But because the temple is surrounded by hills, the sun ‘sets’ rather quickly (not like in the beach where one can enjoy it for a longer time). So we decided to go for the sunrise tour.

We woke up early and met Ika at 4 o’clock in the morning. Though Efata Homestay was only 10 minutes’ walk to the temple grounds, we drove all the way to a different entrance, closer to the Manohara Restaurant. It is the only restaurant located inside the Borobudur temple grounds, and this is where everyone gets their sunrise tour tickets from. At the time, the cost per ticket for foreign guest was IDR 450,000 (approximately US$30). Sunrise ticket for domestic guests cost IDR 350,000 (US$23). 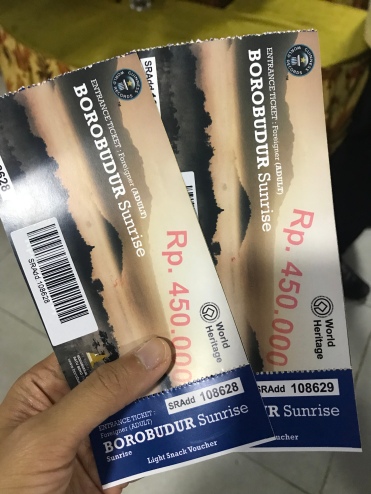 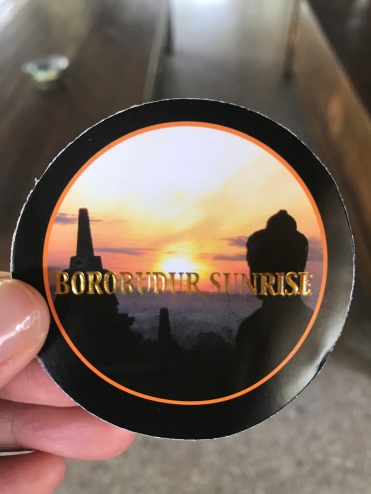 It’s a good thing we got there early because the entrance to the Borobudur Temple opens at 430 AM. We were one of the first few guests who have arrived and were able to secure the best seats. I thought it would not be flocked by tourists because we went on a Tuesday morning, but when I turned around after about an hour, the place was packed. I appreciate the guests who went at the time because the quietness of the place was maintained, and everybody respected everyone else’s personal space.

The sun did not rise dramatically, but I was still astounded by the slow lifting of the early morning mist, and the views surrounding the temple were breathtaking. We walked around each level of the temple and spent time admiring the stupas and the intricately carved reliefs. In the brochure, it stated that Borobudur Temple has 2,672 reliefs, 72 stupas and 504 Buddha statues. Some of the stones had white round marks on them – Ika explained that these were not original stones and were the ones restored.

Sunrise view (waiting for the sun to show)

The hills as a background

A mix of old and new

We headed back afterwards to the Manohara restaurant where snacks and drinks were served. We were also given a souvenir when we returned the flashlights we were provided during the tour.

Our souvenir from the Manohara Restaurant

Snacks and coffee by the Manohara Restaurant

Next we climbed up the Dagi Hill for a different view of the temple and the hills, visited the Archaeological Museum and had a Javanese photo taken for our souvenir.

The part of the temple grounds that we skipped and I tried hard to avoid was the elephant rides. I saw the poor animals separated from one another, chains around their legs. I am strongly against use of animals in tours and entertainment, so when I saw them I was brokenhearted.

I hope you liked my review of my trip to the Borobudur Temple. We were lucky to have found such good hosts like Ika and his wife. If you are flying to Jakarta or Bali soon, and are the type of traveler that likes to experience rich culture, and more laid back places,  why not squeeze in a couple of days and explore Borobudur?