Recently I went with my sister and brother-in-law for an out of town weekend trip to Wilsons Promontory National Park in Victoria, or as it is more commonly called Wilsons Prom. We drove 230 kilometers from Melbourne (around 3 and a half hours) to the southernmost tip of Australia’s main island.

Our first stop was at the Whisky Bay, where we walked up a trail of about 500 meters to get to the viewing deck. It was windy and cold at the time, but I was just astounded by the beautiful view of the beach and the gigantic waves. There was only a handful of people in the area which allowed me to contemplate more during that walk.

Next we went to the Visitor Centre to get a map of the different trails. I read through a lot of information about Wilsons Prom in the Visitor Centre. There is also a souvenir shop and a convenience store next to it. The highlight of that short stopover at the Visitor Centre was the flock of colorful birds lounging around, like the Crimson Rosellas and Laughing Kookaburras. There was this especially playful juvenile Crimson Rosella that instantly felt close to me – that he literally perched on my shoulder and my head! It was so funny, and at the moment I missed my doggies at home. Animals are so awesome (and charmingly cheeky at times)!

On our drive to the next trail, we had to slow down because of some animals crossing. In this photo there was a couple of emus crossing the road as we were about to park for our next trail: the Wildlife Walk.

The Wildlife Walk was a trail that took about 45 minutes to an hour to complete. Here, we saw several kangaroos eating their afternoon snack. We were really hoping to get a glimpse of wombats, but since they are nocturnal and shy animals, we didn’t see any (even when my sister and brother-in-law went back to the trail the next day). The closest that we could see to a wombat was the entrance to their burrows and their poop. 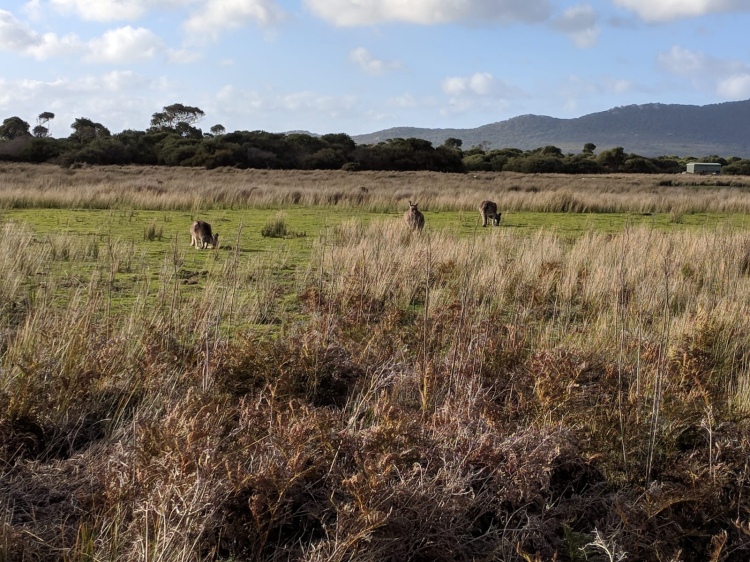 Although overnight camping can be done at Wilsons Prom (so as long as a permit is secured at the Visitor Centre), we opted to drive to the nearby town of Foster and stayed at the Prom Country Lodge. The owners of the lodge also run a cafe called Cafe Max, named after their lovable labrador retriever named Max. Being the good host that he was, Max the labrador greeted me when I asked the cafe owners what time dinner was to be served. 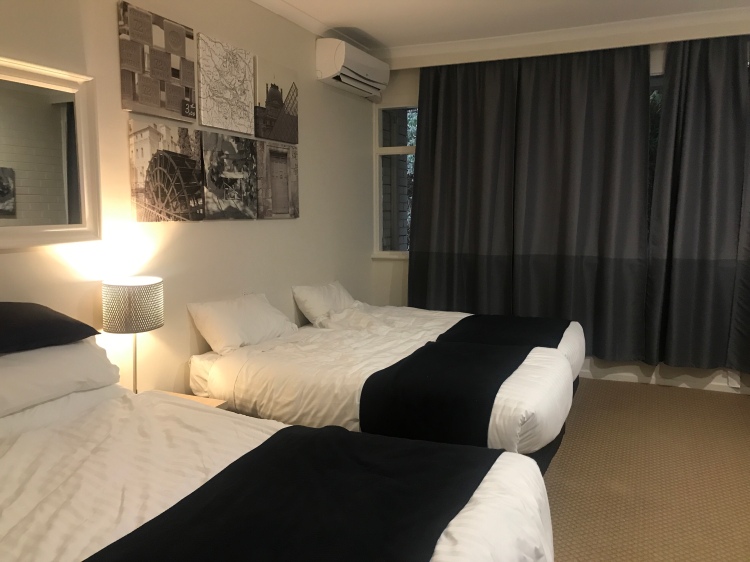 The next morning, we drove to our next trail: Miller’s Landing. Kangaroos were having breakfast as we parked the car. Miller’s Landing trail was an easy 2 kilometers walk where we passed through lush greens and trees to get to the Corner Inlet Conservation Reserve. We ended at the beach to watch birds and look at the mangroves. It was a lovely morning walk for our healthy dose of sunshine. Again, no walk was complete without us attempting to see a wombat – which as usual ended with us only seeing the entrance to their burrows.

Going back to the city we had lunch at one of the towns at a quaint restaurant called The Rusty Windmill. I enjoyed a latte, scones, and my mixed vegetable curry with apple chutney and yogurt.

Some things that we kept in mind during our visit to Wilsons Prom: to do an overnight hiking a permit needed to be secured; no dogs, cats and other animals allowed; no feeding or interfering with the wild; respecting the surroundings and the creatures at all times. Wilsons Prom is also surrounded by marine protected areas.