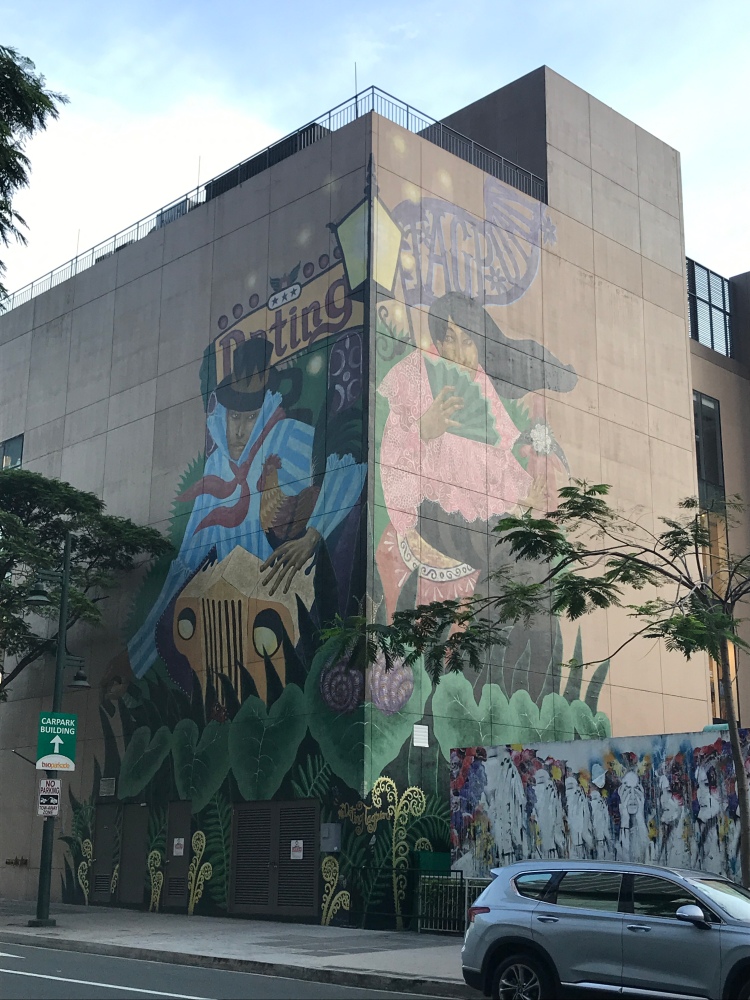 This beautiful mural by John Paul Antido is called Dating Tagpuan. In English it translates to the old meeting place. Very artistically done, where the painting was done on two joint walls. It’s located near the side street of BGC Central. I like passing through this street when I take the long route home just so I can see this art work.

Oh, the age of innocence! Sometimes I’d bring my thoughts back to the days of my youth, when the world seemed bigger and everything was simpler.

But way back in the olden days, the concept of ‘courtship’ was observed. Men would formally visit a woman’s home and bring gifts, usually for both the women they are courting and the women’s parents. They would make their intentions of courtship known, and they would patiently wait until they get the woman’s “matamis na oo” (in English: sweet yes). I believe this practice originated from the time the Philippines was colonized by Spain.

I had my fair share of this back when I was in the university – I also experienced my own harana (serenade) though it was more of a thing the guys did for for fun really. They jammed and sang Eraserheads songs outside the dorm window.

For me, personally, I cringed at the thought of courtship. I mean, it’s so formal and one way, I’d  just say no outright to save the guy his time and effort. More than a couple of times I found ways to dodge guys who would ask if they can go to the house to court.

Whenever I see this mural I would hum to Kanlungan, an old song that my friends  and I strummed the guitar to back in the university. Its lyrics go like this:

In English: Do you still remember when first we met, we were young.

Amidst flowers and trees, that’s where we started to dream and write poetry.

Have you ever courted anyone, or been the one at the receiving end? How was it and how did it turn out? Would you prefer for this Filipino tradition to be revived?